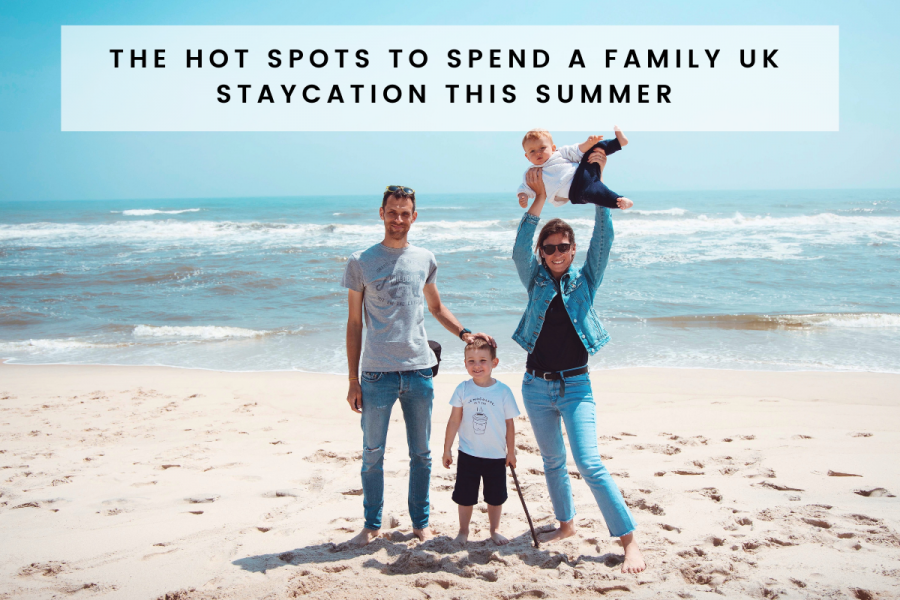 This summer, it’s all about the Great British Staycation! With such a limited Government-sanctioned Green List of countries suitable for foreign travel, it’s time to look inwards to what our own island has to offer and luckily for us, there’s a lot! From beautiful beachy breaks to exciting city trips, you might be surprised by what you find on home turf. To take some of the stress out of organising your summer staycation, we’ve rounded up our pick of the adventures that are still available to book for your next family holiday in the UK.

For golden sandy beaches and rolling grassy dunes, Formby beach is a wonderful oasis nestled away on the North West coast of England. Splash around in the Irish sea, enjoy views over the Cumbrian hills and discover prehistoric footprints in the sand at low tide, there is plenty to keep you all entertained for a day at the beach. Formy Beach is now protected by the National Trust, so remember to pre-book your visit in advance via their website to make sure that you don’t miss out. Bookings open at midnight on the Friday preceding the week of your visit.

With a name like the Jurassic Coast, how could this area be anything but epic? This coastal area is the only natural World Heritage Site protected by UNESCO in England, and spans around 96 miles of south-western coastline across Devon to Dorset. Here you will not only find rocks that date back to the Triassic, Jurassic and Cretaceous periods (perfect for little dinosaur lovers), but also some of the most beautiful stretches of beaches that England has to offer, 185 million years in the making. Enjoy an ice cream in Lyme Regis, unwind at Durdle Door and explore the rock pools of Kimmeridge. Your trip will certainly be an adventure to remember!

Otherwise known as ‘Cotswolds on the Coast’, Norfolk is home to some of the best seaside spots in the country. Sure, Great Yarmouth and Cromer are renowned as some of the best beach towns in England, but hidden away along Norfolk’s 90 miles of coastline you can find a magical network of ‘secret beaches,’ where your family can enjoy some quieter time together, far from the maddening crowds of the region’s major resorts. Push through the beach grass at Eccles, paddle in the shallow shore at Sea Palling and bring your dog along to play at Scratby; there is so much to explore in Norfolk.

Spanning over 200 square miles, there is plenty to do, see and experience in the Peak District. Easily accessible from major north-western cities such as Manchester, Sheffield and Leeds, visitors can make their way through this extensive national park by car or hop on and off the reliable network of local buses that link the various towns and villages around the Peaks. Teach your children some important survival skills at one of the region’s many popular fishing spots, take a mini hike along the hills and valleys or make a splash with a go at canoeing or paddling on the Cromford Canal. If British Summertime is being its usual, unpredictable self, head underground to one of the area’s many caves, including Peak Cavern, otherwise known as The Devil’s Arse thanks to the flatulent noises made by the flood water as it drains away (the kids are sure to love that!) If you’re feeling peckish after all of these adventures, take a trip to Bakewell, the region’s largest town, best known for its beloved Bakewell Pudding (never tart.) Make sure to find the real thing at The Original Old Original Bakewell Pudding Shop, whose puddings are lovingly made in the local Bakewell Bakery according to the original, top-secret 19th Century recipe.

More than sleepy villages, limestone bricks and thatched cottage roofs, The Cotswolds is home to some of the country’s most exciting animal attractions. Meet some new feathery friends at Birdland, learn all about animal conservation at the Cotswolds Wildlife Park or take a ride on the wilder side at Longleat. Home to England’s largest safari park, Longleat is the first of its kind to open outside of Africa. Drive through the expansive park where lions, tigers, giraffes and more roam freely or step out through the main square where visitors can encounter koalas, meerkats and more!

The home of swashbuckling pirates and great oceanic expeditions to new worlds, Bristol is jam packed with adventures for the whole family. Step aboard Brunel’s SS Great Britain, tour the ship and meet its Victorian passengers; admire the magic of engineering with a self-guided walk across the iconic Clifton Suspension Bridge and spend the day exploring the charming village; or search the city for Banksy’s most well-known artwork, hidden along bridges and tall buildings. If all of this isn’t enough to keep your little ones entertained, the city of Bath is just over ten minutes away by train, where you can discover a whole new world of Roman and Regency era attractions and architecture to transport your family back in time.

As King George VI said, “The history of York is the history of England.” Founded formally by the Romans in 71 AD, York has since been home to Anglo Saxons, Vikings and Norman conquerors, all of whom have left their mark on the city. Explore the city’s many immersive museums as you travel back through 400 years of York’s past at the Castle Museum, meet the original Viking settlers at the JORVIK Centre and see, hear, smell and feel the city’s history at The York Dungeon. Don’t forget to stop for tea along the way at Bettys Cafe Tea Room on St Helen’s Square and enjoy one of their famous ‘Fat Rascal’ scones, filled with fruits and decorated with a friendly glace cherry and almond face. Ok, now we’re hungry…

Learn all about the Battle of Bosworth, the War of the Roses and the rise of the infamous Tudor dynasty in the fascinatingly diverse city of Leicester. Visit the city’s 800 year old market and enjoy an authentic curry in one of Leicester’s many incredible South Asian restaurants to fuel up for a big day of sightseeing. Since the 2012 discovery of King Richard III’s body in a local council car park, the city’s history has come under the spotlight. There is certainly plenty to discover, from the King’s tomb in Leicester’s spectacular Cathedral to the industrial era Abbey Pumping Station and Belvoir Castle just outside the city walls, built following the Norman Conquest in 1066. On sunny days, take a stroll through Abbey Park along the River Soar and admire the city’s green riverside scenery and sit down with a picnic of locally made Melton Mowbray Pork Pies, mild Red Leicester cheese and some spicy Bombay Mix.