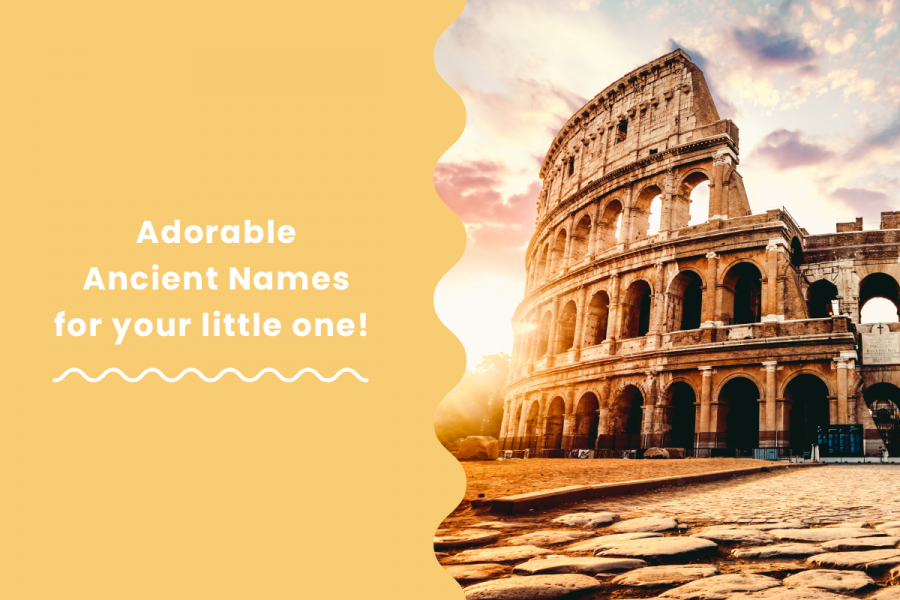 There’s so much in a name. That’s why it’s important to give your newborn one that fits them just right. Don’t worry, we’ve got you covered by sourcing the following list of unique and creative baby monikers with staying power – they are derived from ancient cultures, after all. From a multitude of cultures and derived from different time periods, we’re sure to have something that’s perfect for you.

Some of these baby names are so ancient you’ve probably never even heard of them – but that’s not always a bad thing!

Take inspiration from the Latin-originated name Atticus. Meaning ‘from Attica’ – this bold name hails from the region in Greece which surrounds Athens. As a name, it has connotations of literary sophistication and with its trendy Roman feel, combined with the upstanding, noble image of Atticus Finch, this choice is a real winner among boy names. Harper Lee’s best selling 1960 novel, ‘To Kill a Mockingbird’, featured Atticus Finch as the protagonist which has boosted the name’s popularity ever since. Add a prehistoric touch to a little one’s days out with a dinosaur raincoat.

For a name that has deep roots in ancient history, consider the subtle name Aurelia. Meaning ‘the golden one’, this Latin-origin name is the female version of the classic Roman ‘Aurelius’ – a highly common surname throughout the Roman Empire many centuries ago. Julius Caesar’s mother also shared the delicate name Aurelia, as well as the American writer and poet Sylvia Plath, showing its lasting duration and popularity from over 2000 years ago to now. Make days spent inside even more snuggly with a dinosaur dressing gown.

In both the Hindi and Arabic cultures, Kamal is a masculine name that stems from quintessential cultural symbols. Kamal is a boy’s name of Arabic origin meaning ‘perfection’ and has close links to the ninety-nine qualities of Allah which is listed in the Koran. In the Hindu religion, Kamal is derived from the ancient literary language Sanskrit (used as early as 1700 BC), whereby ‘kamala’ translated to ‘lotus flower’. With two positive associations, choose Kamal for a name with plenty of history and meaning behind it. Day trips out will be even better with a jolly jurassic backpack.

For a short but sweet gender-neutral name with multiple meanings, consider Asa. In English speaking countries, Asa is best known as a biblical name stemming from the King of Judah (900 BC) – in this Hebrew context the name means ‘healer’. However, Asa is also a Japanese name with an equally pleasant meaning: ‘born in the morning’. Although they do have two different pronunciations (Ay-sa versus Ah-sa), this is one cross-cultural name that would work wonderfully in an increasingly global world. A little Asa will love taking their first steps while wearing some roarsome high tops.

Take inspiration from the historically rich and diverse name Raisa. In Yiddish, Raisa means ‘rose’ after the elegant, beautiful flower while in Arabic, the name is the feminine version of Rais meaning ‘leader’ or ‘princess’. Beyond the Middle East, Russia claims Raisa as a name harking back to a 4th century martyr. Evidently, Raisa has a multitude of meanings and history behind it – a true rose of a name. Once again, this lyrical name isn’t restricted to a particular gender. Little ones will have a dino-mite day out with a brilliant backpack, perfect for holding all of their bits and bobs on their big adventures.

For a delicate yet strong name consider Zahara. In Swahili, Zahara translates to ‘flower’ and this sweet moniker is also a feminine name of Arabic origin, said to mean ‘she will flourish’. It is a very popular Muslim name as in Islamic belief, it is the name of the Prophet Muhammad’s mother (632 AD), and is often used in honour to her. This name first came into the spotlight when Angelina Jolie bestowed it on her Ethiopian-born daughter in 2005. In its similarity to the name of the desert, Zahara is likely to retain a distinctive and exotic feel to it. Treat a child to a dinosaur glow in the dark soft toy that will scare away all of their bad dreams.

Pay homage to the Romans with the Latin unisex name that translates to ‘queen of the heavens’. Juno was the sister and wife (don’t ask) of Jupiter, the patron goddess of Rome and protector of women and marriage. Since the release of the popular indie film Juno in 2007, this lively but strong Roman goddess name has become more and more prominent as a potential baby name and has shifted to become a unisex name over the last few years. Choose this name that represents marriage, love, and commitment for a truly ancient name with plenty of history. Dry off your little one with a dinosaur hooded towel to keep them warm and cosy after bathtime.

The name Dominic is a boy’s name of Latin origin meaning ‘belonging to the lord’. Dominic derives from the Latin name Dominicus and in the past it was given to boys born on Sunday – the word ‘Sunday’ in French and Spanish shares Dominic’s roots. In use since the medieval times, its most famous bearer was St. Dominic, founder of the Dominican order of monks in the thirteenth century. The name Dominica is a girl’s name of Spanish and Italian roots with the same translation – ‘belonging to the Lord’. Fashionably continental, this fresh name has been used since the Middle Ages. Keep their lunch and favourite snacks safe in a jolly jurassic lunch bag.

Pay homage to the ancient Greeks by choosing the name Theon, meaning ‘Godly’ or ‘God’s gift’. Theon of Alexandria, who is thought to have brought the name recognition, was an ancient Greek teacher of astronomy and mathematics (335 AD), in addition to being father of the first female mathematician. For a short name that’s easy to pronounce, with history that dates back to the 5th century, Theon is a great option for a newborn bundle-of-joy. Mini Theon will love to cuddle up to a stegosaurus soft toy before bed.

We hope that these pre-historic names will inspire your choice for your little one.