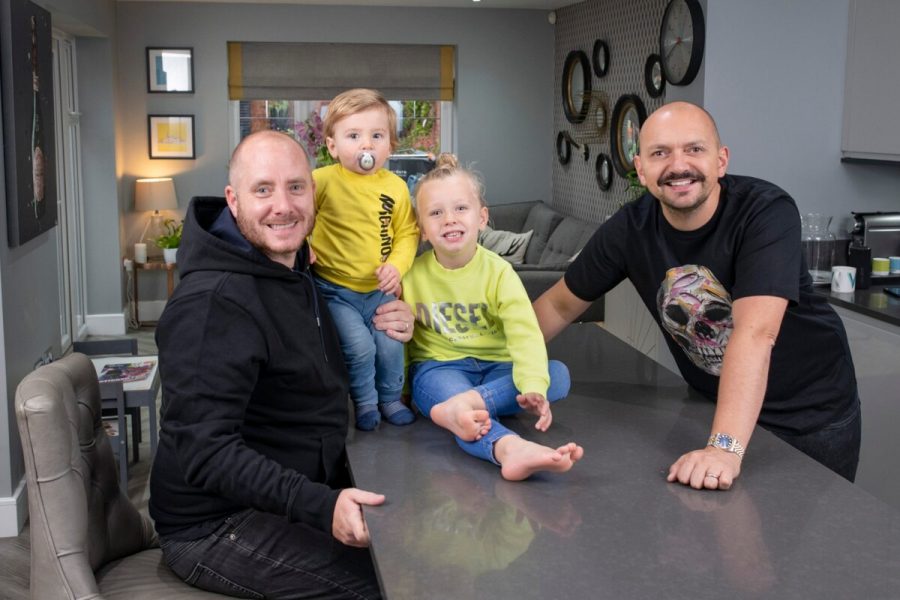 Our Surrogacy Journey Part 1: TwoDadsUK share their journey to parenthood

I’m Michael and I’m married to Wes. We met by complete chance in June 2012 at Birmingham Pride no less, both single and not looking for a relationship, and pretty much from our first meeting I knew I’d met someone that was going to take my life into a direction that I’d been waiting for. Four months later (I know, right!) we were engaged and in August 2014 we married in front of all our friends and family.

We’re Dads to our two children, Talulah is 4, and Duke is almost 2. Wes also has a 16-year-old daughter named Katie, she also lives with us and is an amazing big sister to our children.

I guess we’re a little different from most families, but the one thing we have in common was the desire to create a family, the love we hold for our children and the dreams we strive to make happen for them. We’d do anything for them, just like any other parent would do for theirs.

Surrogacy in the UK

Our family was created via surrogacy, from the beginning this was our preferred way to family build. We often get asked ‘why didn’t you just adopt?’ to which we occasionally  and politely respond with, ‘why didn’t you?’. Telling our story of how we became parents helps others understand the lengths the LGBTQ community often have to go to, whether that’s adoption, co-parenting, fostering, IVF, IUI or surrogacy.  It’s also important to say that Surrogacy isn’t just reserved for the LGBTQ community. It’s a route to parenthood for those struggling with infertility such as PCOS, MRKH, Ashermans Syndrome and those women and people who may have had cancer.

Surrogacy in the UK is perfectly legal, however commercial surrogacy is not – therefore UK surrogacy is altruistic. Which means a surrogate is reimbursed ‘reasonable expenses’ (which varies from £0 to £20,000) with the average around £12,000 for carrying a pregnancy. There are a number of strict laws around how surrogacy must be carried out. Several organisations in the UK can help intended parents navigate their way through the varying options. Expect to pay a membership fee for their services and depending on the organisation be prepared to wait to become a member, as waitlists can be up to 18 months to fully sign up. Or you can opt to embark on an independent journey which involves working without any professional, structured support, these are free to access and are usually all online. We’d always recommend seeking legal advice, just so you understand the law, and Silver Cross are not associated in any way with my recommend

There are two types of surrogacy, traditional or straight surrogacy. This is when the surrogate would use her own eggs and therefore have a genetic link to the child. The other is gestational or host surrogacy, this involves IVF and also donor eggs and/or sperm.

The current law in the UK originated from The Surrogacy Arrangements Act 1985, it’s desperately waiting for an overhaul – more on that later. The laws state that any woman who gives birth is classed as the child’s legal mother. If she is married, then her wife or husband is classed its other parent. So, despite not being biological linked to the child potentially, our surrogate and her husband are our child’s legal parents. Crazy isn’t it? We would have to apply for something called a Parental Order. So once the child is six weeks old, we submit our application to the court and go to court to change the legal parentage – straightforward enough, but so unnecessary. Thankfully there is overwhelming support to ensure this is changed in the new bill which is being drafted in 2022 hopefully.

I had always had a desire to have a biological child, no different than most people. The way in which I had to embark on that journey though was a little different. Being two men, we needed two vital ingredients to complete our family: An egg donor and a surrogate. Therefore, we embarked on a gestational surrogacy journey.

The outlook was positive but also daunting. Finding all the relevant information was exhausting. It took months to compile and the materials often conflicted, we began an independent journey as all of the not-for-profit surrogacy organisations either had their registration books closed or had 1–2-year waitlists. We immersed ourselves into the Surrogacy world, made of tonnes of friends too. In all, we spent around three years researching our options as we knew very little about UK surrogacy, and in the beginning, we explored all the international options too – but the UK just felt right.

Advice for other same sex and gay parents

As Wes already had a daughter, choosing who ‘should go first’ wasn’t an issue for us, whereas some couples often have a battle making this important decision. It’s a conversation I’d suggest that you have in the early days as it can create some friction and even resentment, and so discussing this early on prepares you for the journey better. Being the non-biological parent for example may take some getting used to (pre-birth) or require additional counselling. Personally, leaving it up to the scientists seems the more sensible option: Use your best embryo first would be my advice, meaning having both intended fathers create embryos, as most like to, and then seeing which embryo has the best chance to become a live birth.

We joined a number of networking forums where surrogates and intended parents chat online (Facebook groups) and over time build relationships/friendships. We couldn’t believe of this new world we’d discovered.

We met our surrogate after around six weeks of being active in the surrogacy groups, and we hit it off immediately. We were delighted, and we also realised we were very lucky – meeting someone this quickly who you just ‘click’ with is rare, but it worked.

Our surrogate, Caroline, was married and had never been a surrogate before. She had four children of her own and had always yearned to help make another family.

Over the next six months we built on our friendship, we met with Caroline and her husband regularly, went out for meals, weekends away, and spent time with all her family. The nerves in the early days had long gone by now and they were replaced with excitement.

Stay tuned for Part 2, which will be published next week.