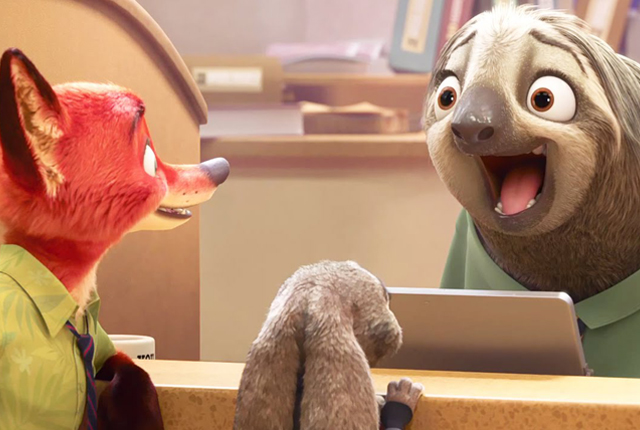 March 29, 2016Lifestyle, Things To Do, Uncategorised No Comments

March 29, 2016Lifestyle, Things To Do, Uncategorised

You’ve likely seen the trailer and posters for Zootropolis by now, and if not you’ll soon have your kids clamouring to go see it once their friends are all talking about it at school. We for one loved the trailer showing an excruciatingly slow bunch of sloths holding up Lt. Judy Hopps’ investigation, but to get a non-biased review of the film we sent one of our favourite bloggers and Instagram mums Sofia Gouveia to go see it with daughter Suri. Here’s what they had to say:

Hi Sofia! Are you and Suri a big fan of Disney/Pixar films normally?

We sure are! From Frozen to Finding Nemo, The Incredibles, Inside Out – you name it, we’ve all watched most of the Disney/Pixar movies over and over again. In fact, her first 3D movie in the cinema was The Good Dinosaur and she had the best experience ever.

What did you think the film was going to be like before you went to see it?

They did a great job with the trailers and the movie didn’t disappoint at all; in fact it surprised us very positively as the storyline was much more interesting and intense than we could expect.

Was it a full cinema?

We went to the 10:20 screening and there were a lot of families there – even some adults by themselves.

What was your overall impression of the film?

The story is engaging and unpredictable, full of lovely and funny characters for kids, but also with a layered subtext for adults and older children. The scenarios and animation are some of the best I’ve ever seen – if not the best – and the characters are cute and friendly whilst remaining “real”. The adrenaline was high for the whole movie, and was packed with funny moments where we couldn’t stop laughing. It also featured some more intense and scary ones which made Suri want to cover her eyes, but couldn’t because she really wanted to watch everything that was going on!

Could you recognise any of the voice actors in it?

Unfortunately not, but I have to confess that it needs to be very obvious for me to recognise it as I don’t pay attention to that. I always get so into the movie and character that I don’t even think who is behind it – Lt. Judy Hopps was Lt. Judy Hopps, no one else. (FYI, she’s voiced by Ginnifer Goodwin, with other actors including Jason Bateman, Idris Elba and Shakira.)

Would you recommend the film to other families and their children?

Absolutely, it’s a fantastic movie that kids and adults will definitely enjoy.

8 – only because she got a bit scared in some parts of the movie! But she still wants to see it again, so I guess it will be one more to watch until we know all of the characters’ lines…

In case you’ve yet to see it, here’s the official trailer for Zootopia (named Zootropolis in the UK) :

Have you seen the film with your kids yet? Do you agree with Sofia’s review? Let us know in the comments below.