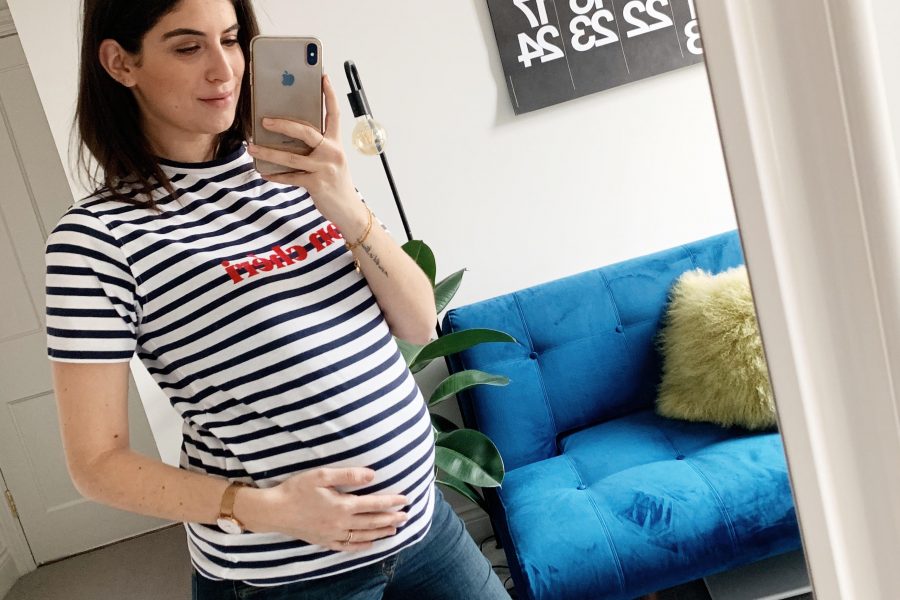 On Holiday with Lily Pebbles and Baby Grey

Lily Pebbles visited Montpelier when she was just a baby, on her first ever holiday. After falling in love with the city at such a young age, the London based influencer and mum-of-one wanted to give the same experience to her baby, Grey.

We adore her relatable, positive attitude on motherhood and as a special treat we caught up with Lily about her first trip with little Grey, who is just over 3 months old. Here she discusses her experiences and the challenges of travelling with a baby. 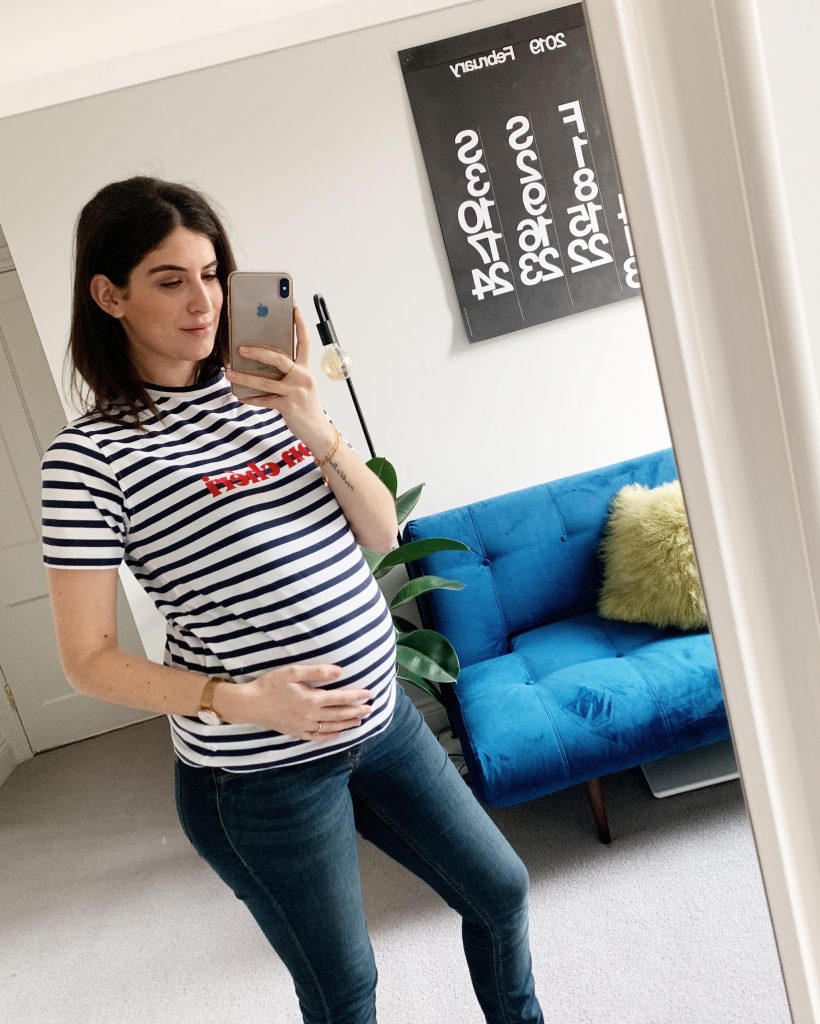 Lily booked her trip while she was pregnant as the thought of going away with a new-born was daunting and she knew she would not be able to bring herself to do it once the baby had arrived. She chose France as her first holiday with Grey because the flight was short, easing herself into travelling with a little one. “I didn’t know what to expect. My own [in-flight] routine used to be watching films and listening to podcasts, and funnily enough, I downloaded some stuff on my iPad which now sounds ridiculous. I didn’t even take my iPad out for the whole flight! I basically spent the whole time making sure she was sleeping and keeping her entertained,” she explains.  “I used a sling because she is so little, which I found handy because then I had my hands free to sit down and put my bag where I needed it, I wasn’t just awkwardly holding her. The rest of the trip I was just kind of playing with her and keeping her entertained. I learnt after the first flight that it’s a good idea to feed them on landing to ensure they’re swallowing, so their ears don’t hurt because their ears get sore when flying. This applies whether you are breastfeeding or bottle feeding. If you are bottle feeding, then just pack an extra bottle and try to feed them on landing. Other than that, we just let her lay on us, put the armrests up and let her have a little sleep on our laps. It was fine and it was easier than I thought it would be.”

Going away for the first time with a baby (or child) can be challenging for any parent so it is normal to have initial teething problems. “When we first got there, it was actually a bit of a shock. It was so different going away with a baby, I didn’t expect it to be so different. You have all these new challenges. There was a crazy heatwave last week and the house we were in had no air con, so I was on the phone to my mum worrying. I was a little bit panicked about Grey being too hot and we had to buy a fan, typical first-time parents!” She laughs at herself. ‘There were other things like the monitor we had didn’t stretch in the house we were in, so when we were eating dinner, I couldn’t see her or hear her and that made me a little bit panicky. All these little teething problems were not an issue by week two.”

Lily’s usual warm demeanour comes across as earnest as it does in all her videos; she wants to experience motherhood and include other mothers on her journey with her. So, what are the top tips for travelling with a baby? “We did that thing called ‘meet-and-greet’; so instead of parking in the car park and getting the bus to the airport, you just turn up and somebody parks your car for you. Do it. It’s so worth it. When you’ve got a baby and you’ve got a million suitcases and you’ve got travel cots and car seats, the last thing you need is to be getting on a bus, so definitely do the meet-and-greet at the airport. It’s not expensive and it’s worth every penny.” Secondly, it’s so important to organise yourself in advance and make a packing list. Packing everything the night before is not an option now, so it’s best to make a baby packing list too. “I’ll write a list and tick things off, but the most important thing is to make a list of the last minute items, because until the morning we left, we couldn’t pack her monitor, her sleepyhead etc so writing a list of those last minute essentials is pretty important.” 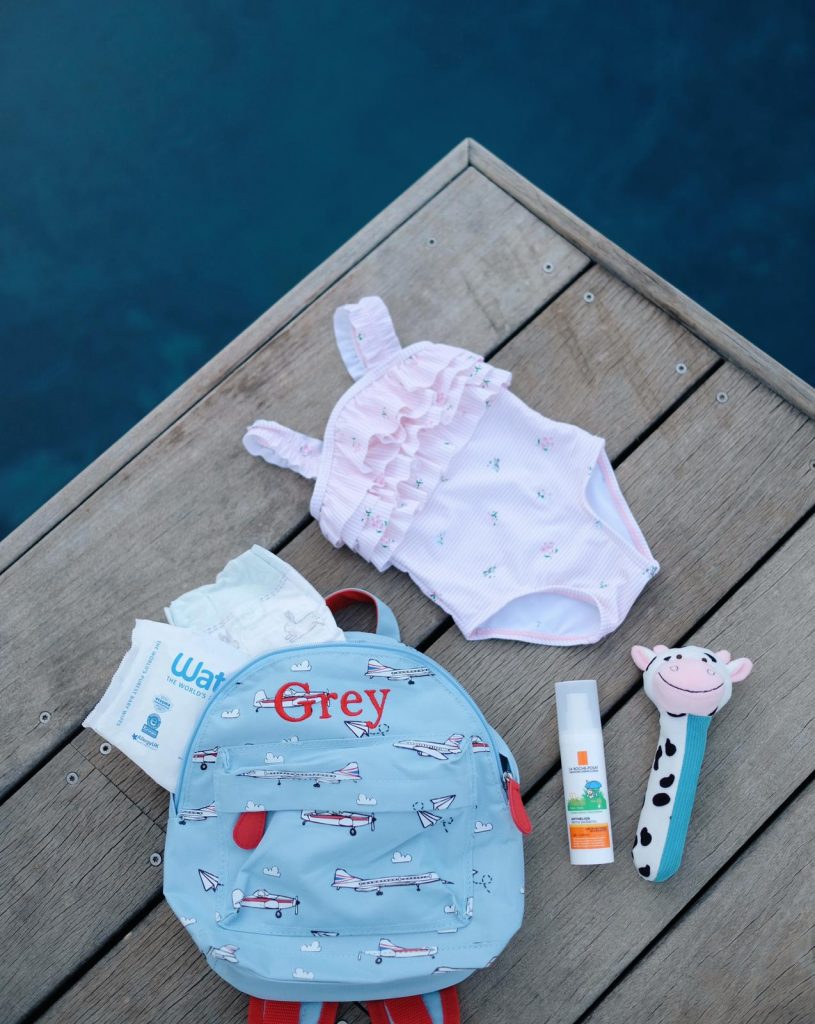 Finding time for yourself to relax is not as easy when you have a young baby, but Lily explains that her and her husband took turns looking after Grey to ensure that they both got time to relax. “At the beginning, I was sitting in the shade, thinking, ‘I don’t know if I’m actually going to get to enjoy this holiday at all.’ But after a few days we got into the routine of basically just taking turns. There was one time, that me and my husband got to spend together when my mum was taking care of her but most of the time we were just taking turns, playing with her and just making sure we had equal time to listen to a podcast and sit in the sun. Team work basically. Additionally, if you have a routine with your baby, stick to it because that will make you feel more relaxed. Making sure they get enough naps and being fed at the right time will just take away any stress around that.”

The best products for travelling with a baby? “First of all, an app. We found an app called The Baby Monitor; you just need two devices like an iPad and a phone, and you can use it as a baby monitor if you have WIFI. That saved us when our monitor didn’t work. The travel buggy was really good because we could take her right up to the plane and store it in an overhead compartment; we used a Silver Cross jet.” (Lily’s sister also had a Yo Yo which she recommended.) “You don’t have to put it in a hold, and you don’t have to wait at the other end for your buggy while you hold your baby.” 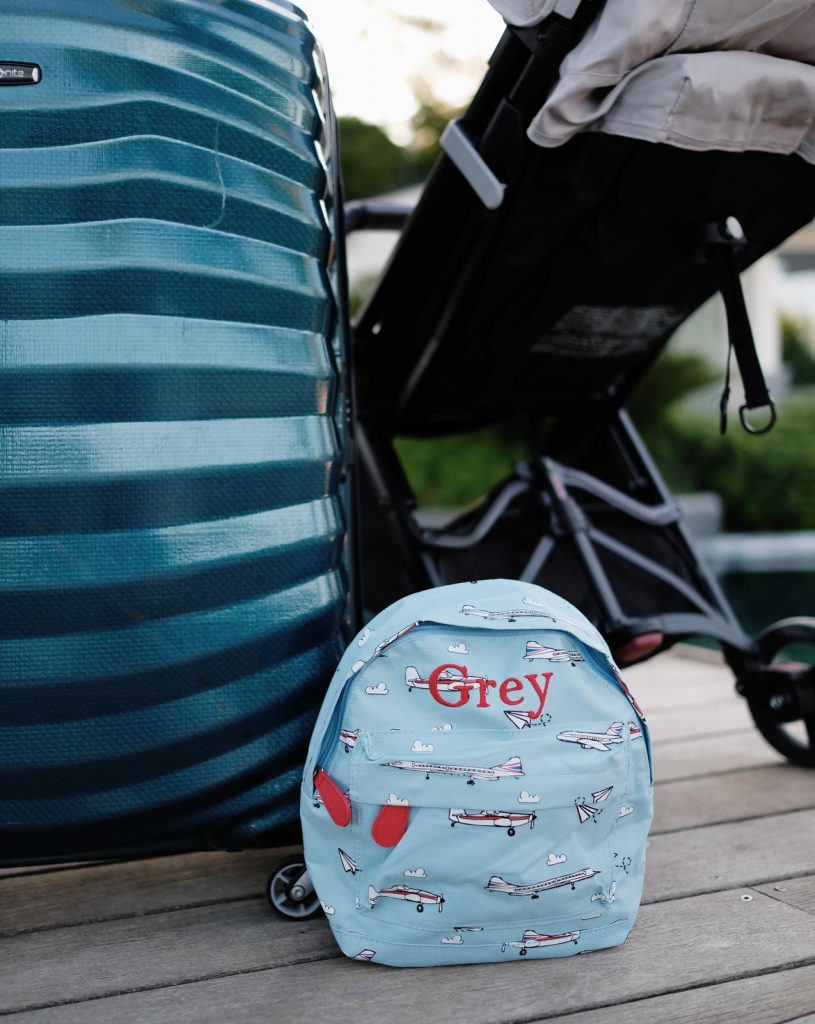 “Muslins are so good because you can use them for so many things. Obviously when you’re feeding but when the sun was out, we could just cover her legs up a little bit, or if she wanted to lie on the sand she could lie on the muslin. It has so many uses. If you’re bottle feeding, then sterilising bags are a lifesaver; you literally just put a bit of water in them and you put them in the microwave. All you need is a microwave; you can sterilise your bottles and they fold up because they’re just little bags. They’re amazing! Then, I’d recommend travel window shades. When I bought these on Amazon, I thought I was going a bit over the top but if we didn’t have them, it was so sunny, she would have been in the blaring sun every time we got into the car. They fold up small and they stick on the window, so those are great!”

Finally, take a bath seat with you. “We used it for so many things while we were away; we used it in the bath, we used it as a little water seat by the pool, we used it as just a seat for her to sit on because we couldn’t take one with us.”

Lily gave us her top 3 My 1st Years products. See below to shop now! 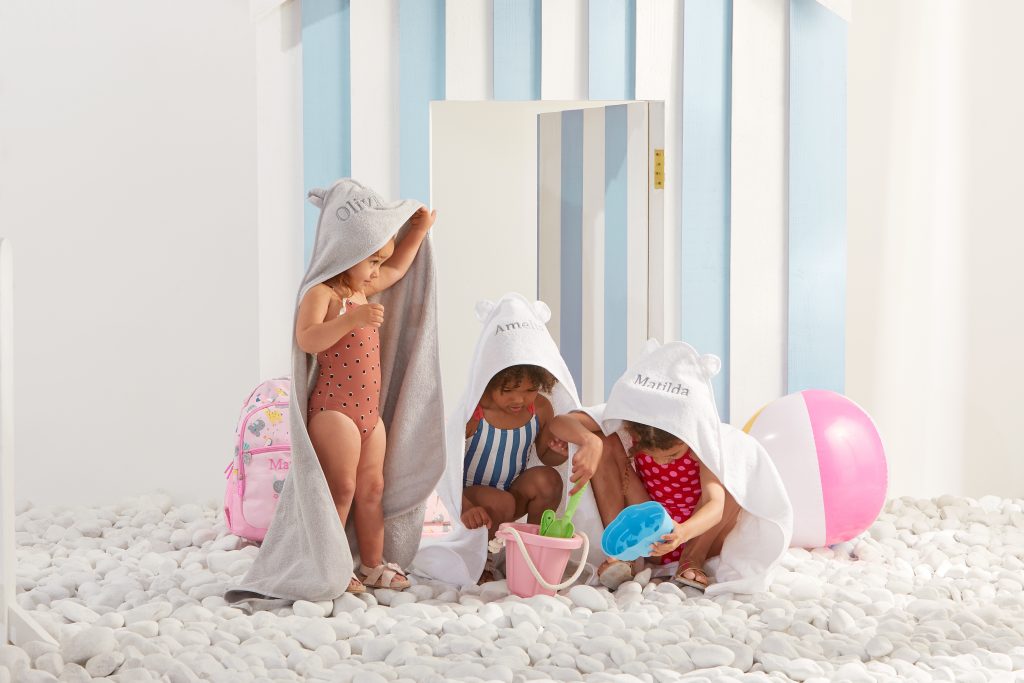 “We love the hooded towels, they’re so useful to wrap her up in. And it’s got her name on it, so it’s really cute! We have two of them here, one we keep in the bedroom and one for the bathroom, so we don’t lose them. I took both with me; I took one for the pool and then one for when she had a bath.” 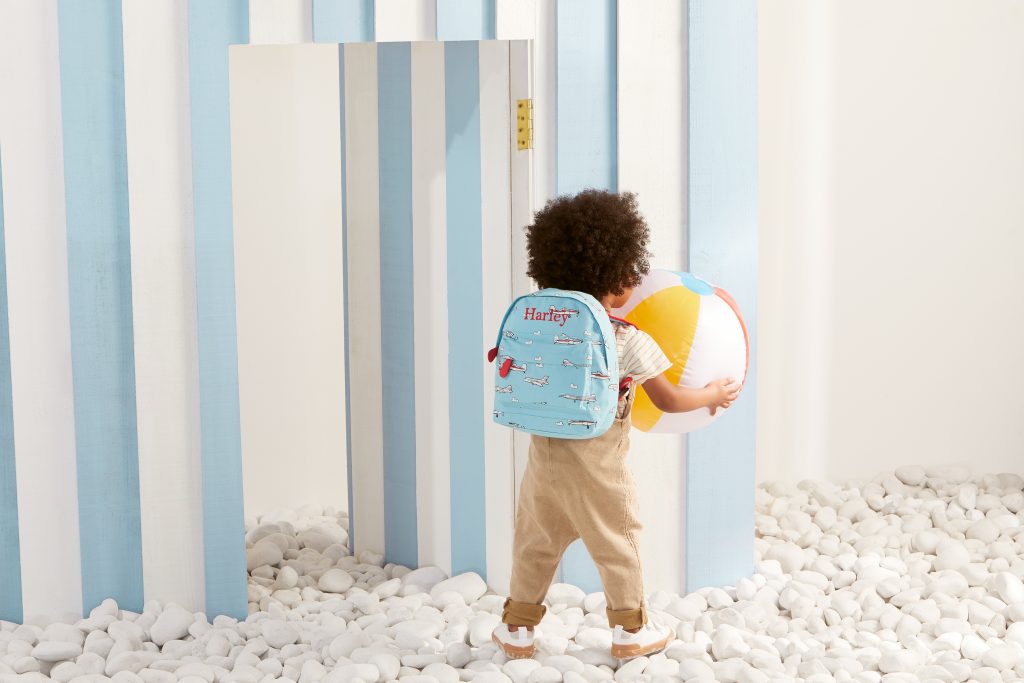 Lily’s Nephew Rocco “took his with and wore it most days. He packed it – well my sister packed it – full of new toys that he’d never seen before. That’s a top tip for a toddler; give them new toys for the plane because then it really keeps them entertained and they’re so excited to have a little backpack full of things for the flight.” 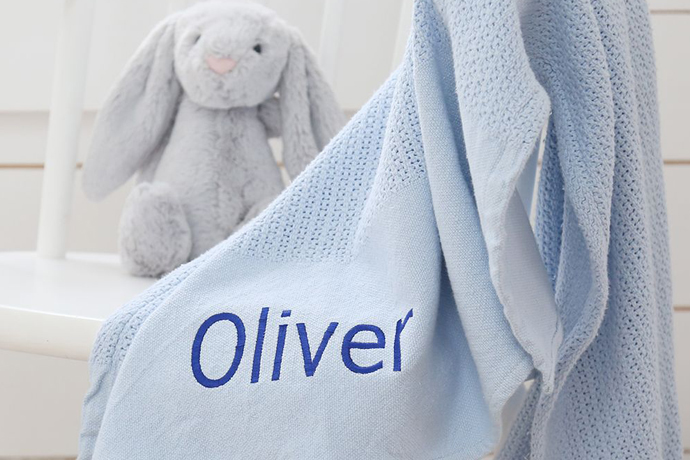 “We kept the blanket in our hand luggage, and we used it on the plane when the air-con was really high, we used it to lie her on too.”