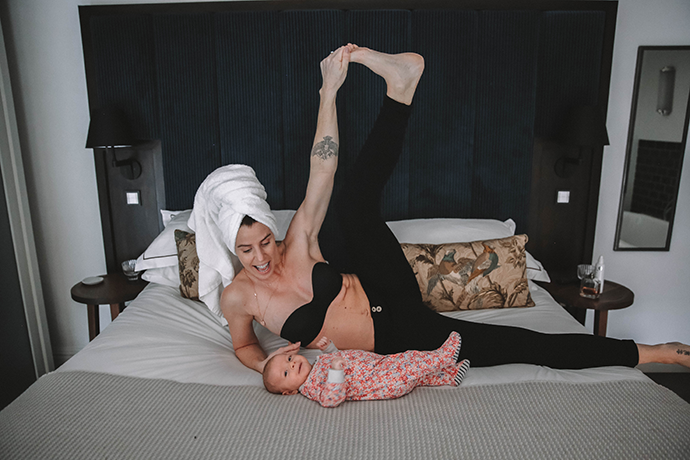 Carly Rowena, a UK based fitness blogger and mum of one, is known for her rallying honesty and openness. In recent years her blog has developed from fitness alone and now focuses on wellbeing and motherhood as well. We were lucky enough to talk to her about all of the above and as usual, she was ever so inspiring. Read more to hear her advice on wellbeing, fitness and motherhood.

Listen to your instincts

“I would say I’m an instinctive person. I’d like to say I’m organised but let’s be honest, some days all I do is manage to keep her alive. So, I would probably say I’m an instinctive doer because I literally have a list of things I want to do, but you must go with how the day is going. Like this morning I woke up with every intention of being able to go and work out. Jax managed to get up and into bed at the exact same time that I was going to work out, and I thought ‘that’s not going to happen.’ ”

Guilt is normal but not necessary

“I’d say the challenge of guilt is the biggest thing I’ve faced since becoming a mum. I love my job and I love my child, but I often question ‘are you putting enough into both?’ The challenge that I face being a parent is knowing that it’s ok if you are just playing with them. I’ve always felt like ‘I should be doing something productive now’ and sometimes everything else goes to pan and that’s pretty hard. Also, the constant criticism from everybody else is probably the toughest thing but I just think ‘don’t stress.’ If you feel like you are doing the right thing then that will be the right thing.”

“You must figure out why you are feeling guilt; is it that you are not spending enough time with your child or not doing enough work? And if it is either of these then you need to ask for help from other people. My guilt developed because I was trying to take it all on myself but everybody around you really wants to help you. Sometimes it can be really hard to accept that help but you should actually ask other people for help so you can do the things that mean the most to you.”

“I am a very positive woman; I knew that Jax was going to cry and probably not sleep through the night, so I never really spoke about it because everybody knows that happens. But then I had people saying that I wasn’t relatable because I wasn’t talking about not getting any sleep. I’ve had people saying stop being so positive because it was pissing people off, to people who don’t want to see any negativity, so you wonder, how do I strike a happy balance? I’ve had the whole, am I going to bring her up as gender fluid? What food am I going to bring her up on? Is she going to be a vegetarian or vegan? So, every single thing you do there is a negative, but you realise you can’t make everybody like you in the world and that’s not what I’m really there for any way. You have to just take everything with a pinch of salt. I’ll share some of my life, but you’ll never know everything about my life.” 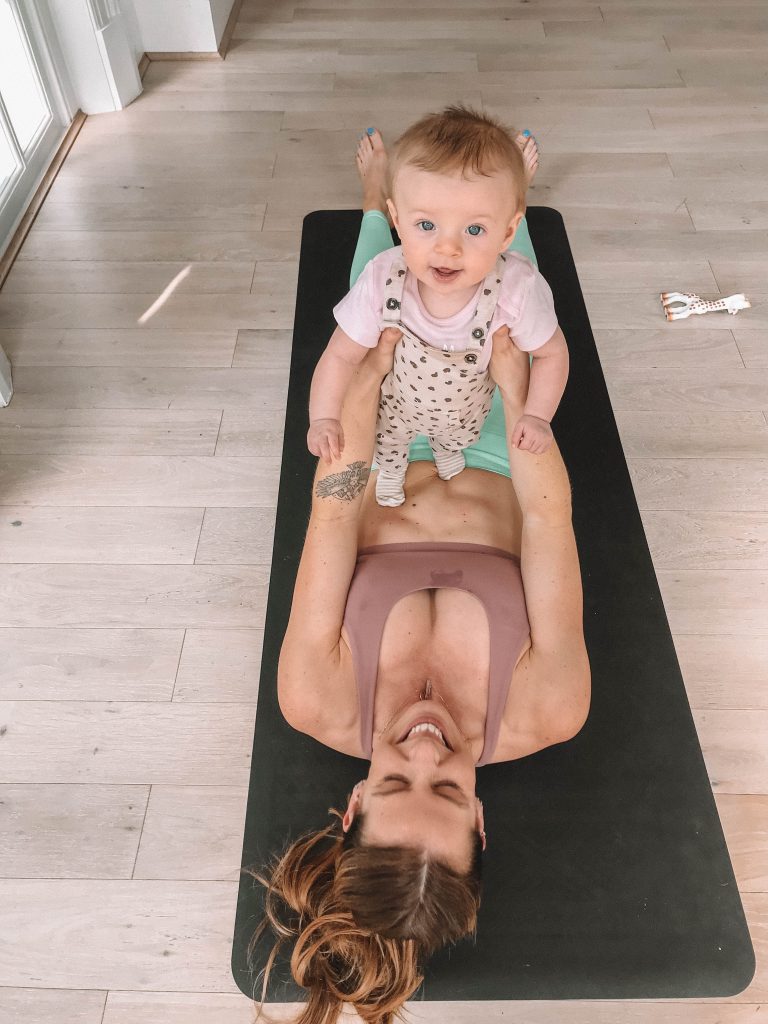 “I’ve always been into fitness – a personal trainer, it was my full-time job, so I always try to exercise or move, whether it’s yoga, or a walk, or anything, every day. For me, that releases a lot of tension and keeps me feeling like myself; like the person I was before having a baby. It’s not necessarily like sweaty exercise every day but it’s something to clear my head. For me, my mental health is best when I can do the things I recognise as myself, so taking my dog for a walk, making the food that I enjoy and moving my body are the most important things for me to do. I also always have a little morning wiggle, which Jax now moves in on. You forget how much dancing makes you happy, so we always have a bit of a dance. We just go nuts and do the worst dancing you’ve ever seen but it feels good.”

“First of all, I’d say get the checks from the GP that you’re all good to do exercise. Secondly, don’t try to change everything overnight. So, you know we wake up and we think ‘right ok, tomorrow I’m going to get up and go to the gym every day, I’m going to be super healthy, I’m never going to touch chocolate again,’ but that’s just lies. It’s never ever going to happen. So, instead of trying to change everything just try and add new things in; instead of removing all our food just try and eat good food.

Instead of stopping everything you’re doing and starting all new exercises everyday just think I’m just going to aim to do 20 minutes like when and where I can.”

Work out. Just do it.

“When you have sleep deprivation the last thing you want to do is wake up and work out.  But you will never regret it when you do it because it will make you feel amazing. Get the stuff ready the night before, put it out, set that alarm and just go and do it because it you won’t regret it once it’s done.” 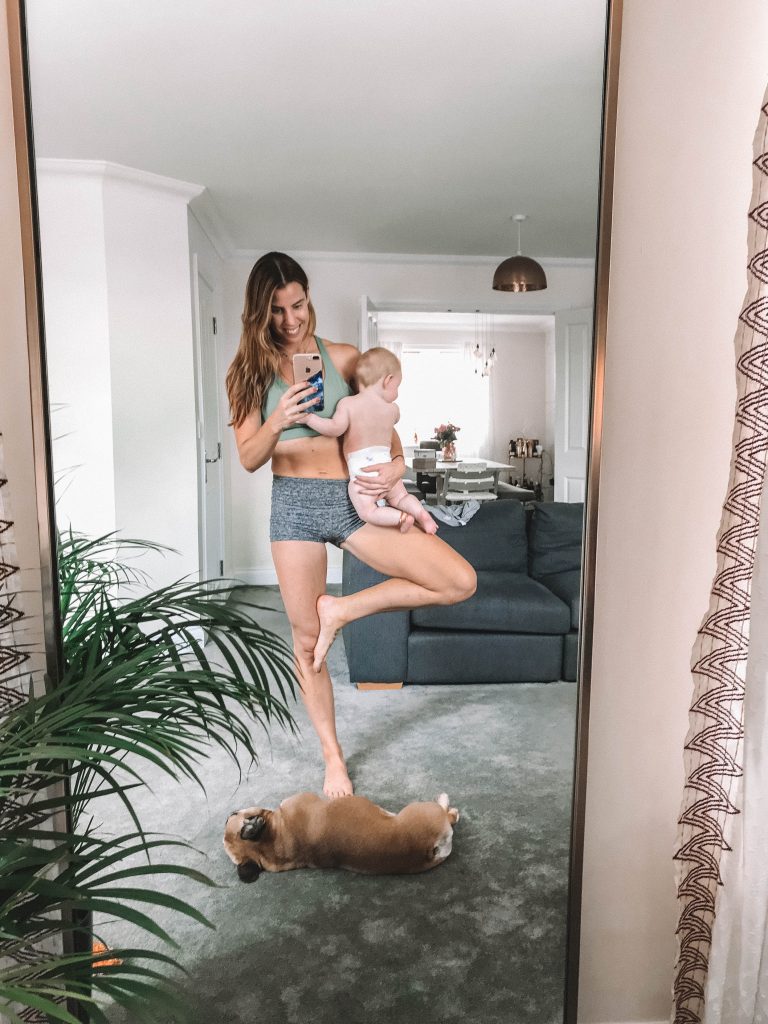 “So I’ve created these work out cards and there’s one for pregnancy, there’s one for home, so you just need your own body and there’s one for if you want to invest in some equipment and it’s literally like a playing pack of cards. So you just pick 4, place them out in front of you and play them on repeat, you can do it with friends, family, your little ones. I say to mums who’ve got no time – while the dinner’s cooking, do it then. While your dad’s doing bath time, you’ve got 20 minutes to just do something. You don’t have to be at the gym for a full hour.”