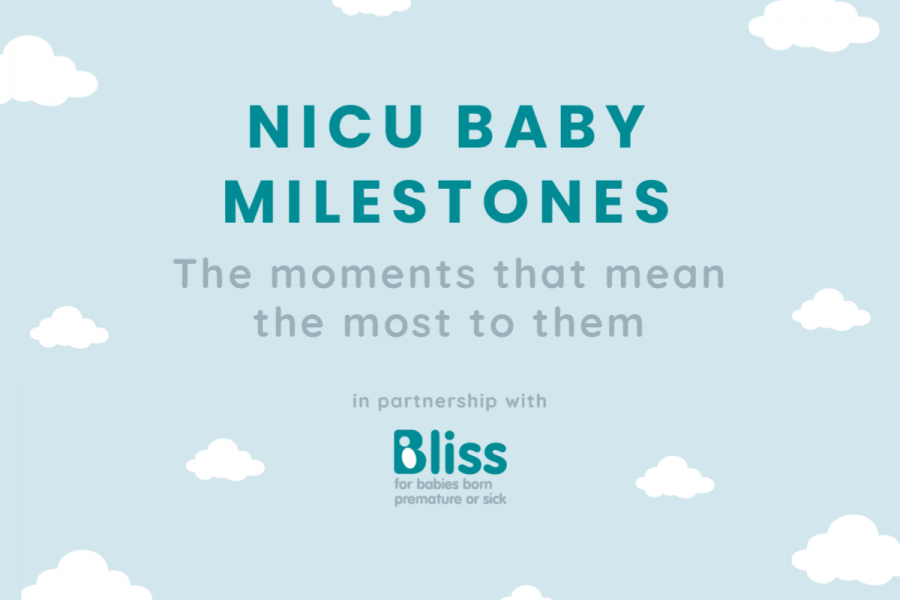 June 22, 2021Celebrate with us, Celebrations, Information, Real life No Comments

If your baby is born early or unwell it can make all the difference to celebrate every milestone reached. Families often tell Bliss, our charity partner for babies born premature or sick, that marking these milestones through memory boxes, journals and baby cards had a positive impact at a worrying time. Here’s two parents’ experiences of this time, using Bliss’ milestone cards.

Our baby boy Alisdair made a very early entrance into the world at 27 weeks after a traumatic pregnancy and birth. We had some idea of being in a neonatal unit as our twins had been born at 32 weeks, but they didn’t need much support and were only there for several weeks. Our journey on the neonatal unit this time round was much harder especially during the pandemic.

The first few days after Alisdair was born I think I was in shock and felt extremely anxious by all the machines bleeping and the noise. I dreaded the ward rounds as I was scared to hear what the doctors were going to say. I also felt a terrible sense of guilt as I was frightened to bond with him. Alisdair had a septum injury which made getting him weaned off the CPAP machine even more important. Gradually, Alisdair became stronger and started to cycle CPAP for longer amounts of time and his septum began to heal. Just as I started to relax a little there would be a setback, but that really does sum up being in the neonatal unit really. It’s very much a case of two steps forwards and one step back.

I remember some of those first milestones and how wonderful it felt. The first time he was able to put clothes on is something that you take for granted when you have a baby. The first time I held him, something I put off doing as I was scared, I might hurt him as his skin was so fragile. It was the best feeling in the world to hold him against my chest. I wish I’d done it sooner.

Eventually, we moved to low dependency which felt like a miracle. I had never even dared to think of going home. I had been in hospital for nearly all of my pregnancy and was finding being away from my other children and husband incredibly hard.

After 56 days on the unit, Alisdair’s big day finally arrived and it was time to go home and meet his siblings. I think all the emotions over the last few months all poured out and as we walked down the corridor with Alisdair in his car seat I was sobbing. I couldn’t believe we were going home when I was taking my baby home. I will never forget that feeling.

I can’t ever thank all the amazing doctors and nurses on the neonatal unit. They truly are amazing. Every day I look at Alisdair and think how lucky I am. He’s done so well since he came home and is such a happy, smiley boy who brings us so much happiness.

My surprise pregnancy ended with a very surprising birth. Following a routine midwife appointment, I was diagnosed with severe pre-eclampsia. My baby was less than half the weight he should have been and clinging on for life. At 29+2 weeks my gorgeous boy was born weighing 840 grams by emergency caesarean. I managed to have a half a second cuddle on the table and then I wouldn’t see him for almost a day as I was not stable enough to go to the neonatal unit.

The separation from my baby was awful and unnatural, I was desperate to be a mum to him but all I could do was look at him through the incubator doors. Then came the magical day where he was strong enough for a real cuddle and a milestone had finally been reached. It was the best day of my life and I was so excited to finally be able to use a milestone card, like a ‘normal’ mum.

Milestones touch you on the neonatal unit just a bit differently, milestones are a way to see a positive light in what can be a very dark situation. Every milestone was a step closer to getting our baby healthy and home. After a few false starts the second-best day of my life happened when we were able to use the milestone card ‘Today I am Going Home’; 84 days, a CMV diagnosis, several blood transfusions, countless failed saturation tests, and more heel pricks than I ever thought possible, we were finally going home.

At this point I had been living in the hospital for four weeks, and with limited facilities due to Covid-19 restrictions. Getting that milestone card out was such a fantastic feeling.

I look at our milestone pictures with so much joy, especially now I have a healthy, happy, wild 15-month-old to compare them to.

For more information about babies born premature or sick, including where to find support, please visit bliss.org.uk.